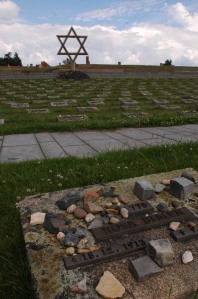 They were letting themselves go.

As I sat on a bench, the foul odor of unkept needs dissolved my senses. The energy was strong and it absorbed all of me.

I walked around, searching for a piece of life to document, but that had been gone for decades.

For a brief second, it was so much easier to just forget — to brainwash myself into thinking I was back in the states — to the pained oblivion of this place.

A wave of anguish poured down on me and I could not surpress the fatigue. It bit me hard — and I dreamed to shut my eyes — ignore the truth.
On November 24, 1941 the fortress town of Terezin, under orders of the Nazi Party, was established as a Jewish ghetto. Beginning with the Jews in Bohemia and Moravia, over 155, 000 Jews passed through Terezin with more than 35,000 perishing to the gruesome hands of disease, starvation and sadistic treatment from their guards. From August 1942 to April 1943 about 21,882 inmates died averaging a daily of 80 souls a day!

Aside from the facts, it’s essential to humanize the appalling things that took place in this now dilapidated town.

Granted the pleasure of her company, Doris, one of the survivors of Terezin joined us on our excursion to the still-standing town.

Her eyes lit up with genuine kindness as we huddled around her — a tiny woman in her 80’s. It was absolutely fascinating, almost heartbreaking, to behold such life and positive energy from a woman who had experienced such terrors. She embraced our questions and befuddled looks with complete patience — strong and independent in each word and move she expressed. Doris was only 19 years old when she was transported to Terezin. She explained that while the experience was horrible, she was thankful for it, because if she had been sent to an extermination camp — Terezin was not — she’d of been dead. 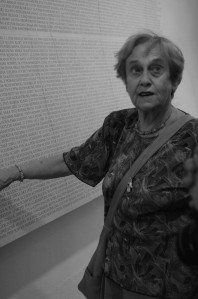 Doris, as she points out the name of her cousin in the Jewish Ghetto Museum.

The silence hit me after arriving at the Terezin Memorial Crematorium. As the energy thickened around me, my mind collapsed at the sight of the furnace, ash-ridden with the remnants of unwilling hearts and relenting spirits. After a tour of the Jewish Ghetto Museum as well as some other important monuments, we were left to explore the nearly deserted town on our own.

As I took a moment to collect my thoughts, I never felt like more of an outsider. My camera firmly clutched to my hand, I squinted in the blinding sunlight. I felt so alone, so deserted. The crumbling buildings housed inhabitants I’m sure but I could not see them, aside from the casual straggler. The town had been let go, and I can understand this. How could anyone bare to live in a town where so many lives had been ruthlessly taken?

Alongside a dilapidated building.

Later in the day we toured the small fortress. This was on the other side of the town and served as the prison in Terezin, where thousands of Jewish prisoners died.

Our tour guide Rosa was a small Filipino woman, persistent in her lecture. Carefully she guided us through the whole lot that is the small fortress — quite large to my appearance. In front of the fortress is the Jewish Cemetery where hundreds of rows of unnamed tombstones mark the lives lost in the prison. 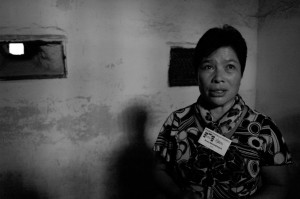 Rosa explains the unfathomable conditions prisoners were placed in

The lined tombstones grabbed at my heart, clutching on to the only feeling I could express: sympathy. It’s hard to understand destruction when you have not experienced it. It’s also even harder to imagine the magnitude of such events when you have not lived through it yourself.

I rested my head — silent and worn down. A tiny smile lined the crease of my lips. While I would never dare to justify such cruel actions, I knew if someone as brave as Doris could make peace with it, so could I — attempt.  It is important to remember, it is important to be conscious. Even more so, it is better to rise above.

Jewish Cemetery, where the prisoners in the complex were buried.

One response to “Angels in the Architecture: Beyond the Rubble, Terezin Lives.”